Now that we’ve reached the end of the year I started thinking about which Social Media moments pop-up while going over the past year.

This for me is number one. Simply because the Old Spice Guy campaign was such a viral success and there were a lot of failed and successful spoofs!

One of the things I really liked about this campaign was the timing. They created 186 video responses in such a short time frame, that is was almost a real-time response. Another thing I think was good (and is also something where a lot of campaigns fail at) is the fact that they found the right balance. The video responses were directed to anyone that tweeted him, from famous people like Ashton Kutcher to John Doe. He even had some advice for the US president.

This made his followers even more eager to engage with him and as a result with the brand Old Spice.

I think we will be seeing more of these fast paced campaigns in the future.

2. BP Oil Spill – how to kill your brand

BP’s oil spill was a great example on how NOT to manage your brand during a crisis. I don’t think BP realized just how powerful Social Media can be. Even spending millions of dollars on an ‘I’m so sorry’ video and other ads couldn’t stop the online community from bashing BP. The fake account @BPGlobalPR currently has over 180,000 followers. The the account has gone viral because of it’s very clever impersonations of the company with tweets like:

To be clear, we will always exist to do more great work for BP and other “polluters”. That’s part of the announcement. (tweet)

@BPGlobalPR wasn’t the only one tweeting about the oil spill though. All around the Social Media sphere video spoofs turned up and @StephenAtHome’s tweet on the BP spill got over 100 retweets. In fact, according to Twitter’s Top 10 Retweets of 2010 list, this tweet is number 1!

Creating an ‘I’m sorry video‘ and making an effort to keep people informed about the gulf could’ve been a good thing for BP. However, with all communications, execution is key, and the execution just wasn’t up to scratch. It all felt more like BP was trying to clean up it’s reputation rather than its mess.

I hope that other companies learn from the mistakes BP has made and that 2011 doesn’t bring us another oil spill disaster. 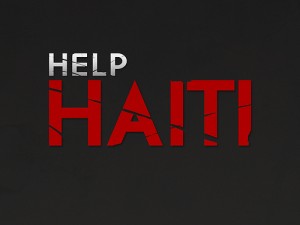 Social Media was used to spread the news quicker than any news network could. On Twitter pictures of the Haiti earthquake spread quickly.

One of the great things that Social Media managed to to was to spread the word about the charity text message campaign in the US by the red cross. They managed to raise over 5,000,000 for Haiti.

I personally think it is great how Social Media is used to do social good. I hope that in the future people will keep using Social Media to do good. I do not wish for another earthquake though. I wouldn’t mind a year or even en entire future without any major world disasters.

Fifa World Cup football (a.k.a. soccer) has had a great impact on Social Media as well, especially Twitter. It all started right before the World Cup even started. Football players weren’t allowed to tweet anymore as soon as the World Cup started nor were they allowed to post on Facebook or any other Social Media site.

The World Cup does dominate the Overall Top Trends list though, with FiFa World Cup being number 1, at 5 we’ve got the very irritating sound of the Vuvuzela (a much discussed topic during the games) and at number 10 Pulpo Paul, the amazing predicting (recently passed) German octopus Paul. Poor Paul even received some death treats, just for predicting the right winner for each game. He even predicted the correct winner in the final of The Netherlands vs Spain. Spain won.

On a more personal note, on Twitter’s World Cup trends list, I’m also pleased to see ‘Oranje’ at number 9. Oranje is the Dutch word for Orange, which is the national colour of the Netherlands. Seeing as I am from the Netherlands I’m happy to see ‘we’ are in the top 10! 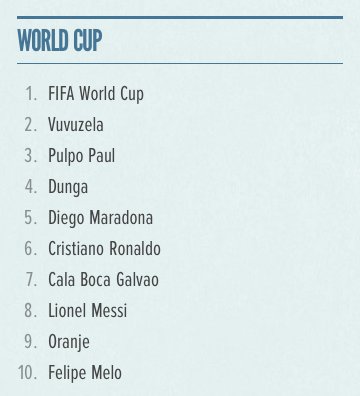 Twitter did make it very easy for fans all around to world to follow the World Cup on Twitter. With special hashtags turning into country flags and a dedicated World Cup page Twitter did an excellent job in helping fans engage on Twitter to discuss the World Cup.

I wonder if the next FIFA World Cup will have such an impact on the Twitter stats again next time. We’ll have to wait till 2018 to find out. That’s when the next World Cup will be held in Russia.

Well, these are my 4 Social Media highlights of 2010. What are yours?