Last week everybody was all excited about Google TV. I saw many sites announcing this new and exciting Google project and even heard about it on TV and the radio. 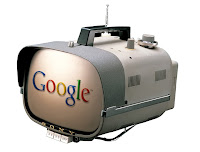 They say Google TV will bring us the following:

That all sounds very nice, but doesn’t really excite me yet. For now it just sounds like you’ll have a computer connected to a TV screen. I can do that now.

What I would like to see in Google TV

What will Google TV be? I have no idea, only Google knows and they’re not saying anything at the moment.

I am quite curious to find out what they’re up to in that department. I’m sure (or at least hoping really hard) that it’s more than what other sites are claiming it to be.

I just hope they won’t connect it with Gmail and flood my sent mail with e-mails like Google Buzz is doing at the moment….(those currently using Google Buzz know what I’m talking about)