British DJ Ruth Flowers is a 69 year-old grandmother that is currently spinning her tunes in Paris nightclubs. 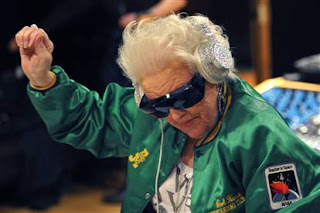 She first came across the club scene after going to her grandson’s birthday party. She said: “I went along quite late and the gentlemen at the door said, ‘I don’t think you want to go in there, Madame’. And I said, ‘Well I rather think I do’,” she said.
“I went in and it was very noisy and the lights were flashing, but there was an awful lot of energy and joy.”

That night she became so enthusiastic she decided to start DJ-ing herself. A friend put her in touch with French producer Aurelien Simon. He taught here all about how to DJ and has helped her develop her own style. It took her four years, but she learned it and is now busy DJ-ing in French clubs.

As she says herself: “It’s a little glammy, a bit over the top, but it fits the bill I think,” she said of her outfits. “I mean, if I appeared in a cardigan, a sweater and brogue shoes it wouldn’t be quite the same.”

Tjongolongo, I thought it was cool when I was dancing with my 85 year-old grandma, mom, aunt and cousins to I gotta feeling from the Black Eyed Peas (trying to do the Oprah flashmob choreography). This definitely tops it though. Tjongolongo, this granny is cool, I hope she keeps spinning for many years to come!

Does your granny spin at nightclubs?