A seven-year-old boy in the UK has raised more than £100,000 for Haiti by riding a couple of laps on his bike. The boy, Charlie Simpson, was so upset after seeing the devastation caused by the earthquake that he told his mother that he wanted to do something for the survivors. 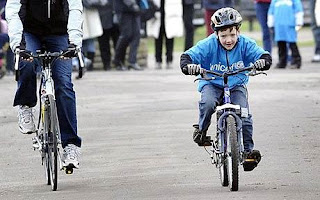 He decided to try and raise £500 for Unicef’s Haiti appeal by riding his bike 5 miles around his local park.

A page was created for him on JustGiving.com, a site that helps ordinary people raise extraordinary amounts for charity. All donations made through his section on the website will go to Unicef.

I think it’s amazing to see how everybody, no matter what age, is going out of their way to help raise money for Haiti.

He may have set out to raise £500, but his efforts inspired many people to donate money online. Within one day he raised more than £60,000 and the donations keep coming in. Last time I checked he already reached over £100,000, tjongolongo, how cool is that!

Have you done something as amazing as this to raise money for Haiti?