Lego recently released an official application for iPhone. The application turns photos into a Lego mosaic, that’s it. Nothing more, nothing less.

I wonder how many fans this application will get. I mean it is a nice and fun application, but personally, when I think of Lego, I think of building things with Lego bricks. 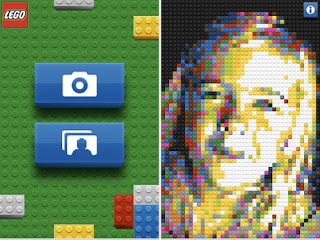 I think it’s nice to see how Lego is also trying out new things in the online and mobile world, but I do wonder if this really is the way to go. If I was working for Lego I would try to built (no pun intended…) on the whole brick building thing. That’s essentially what a lot of people grew up with, building things with Lego, whether it was a car or a house or whatever, it’s the building that creating that was fun.

Just looking at a picture being built up brick by brick with Lego just doesn’t seem just as fun to me. The idea of an Lego app makes me go tjongolongo, but this one, not as much…

What do you think of the Lego application for iPhone, hit, miss or maybe?