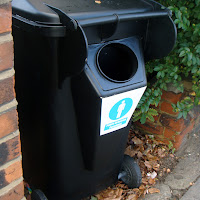 A Swiss designer has created the ‘Pee-lie Bin’ a wheelie bin that doubles as a public toilet.

Tjongolongo, how weird is that! The Swiss designer, Stephan Bischof decided to transform the traditional British wheelie bin as a solution to the growing problem of public urination in the UK city centre streets.
Tests have even showed that people (mostly drunk ones…go figure…) were fine with peeing in the converted wheelie bins.

Tjongolongo, who on earth would actually put one of those bins outside this is just too weird!

I do think it’s an interesting way of using a garbage can though. I keep being surprised with the things people come up with when looking at ordinary daily use objects. People that are in the business of selling objects people use daily should take a look around the web to see what’s being done with their project. There might be an interesting marketing idea just lying around somewhere!

What object would you like to convert and what would you convert it in?