In the Netherlands a new advertisement has been published by clothing company SuitSupply. The ad features a man in a tuxedo smoking a cigarette with underneath the text Start smoking, where it usually says ‘Smoking kills’. They have even created a Start Smoking site for the campaign. 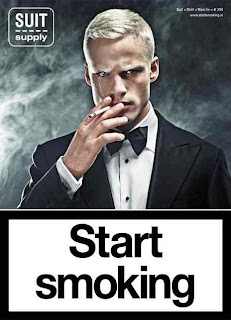 The word smoking in the Netherlands is Dutch for tuxedo so the company is just basically telling people to start buying a smoking/tuxedo at SuitSupply. However, I can imagine how this can be just a little bit too provocative.

A Dutch anti smoking foundation, Stivoro, isn’t happy with the campaign which I can understand as well. They feel it might entice younger people to start smoking.

I personally think it’s funny, but than again, I don’t smoke and the ad wouldn’t get me too smoke, maybe I’m just getting to old to be influenced :).

The campaign did get me thinking though, where do we draw the line with advertising or other ways of communication for that matter? Did SuitSupply cross the line?