After writing about LED eyelashes and an LED dress I’ve now found some LED fashion for men! Designer Waldemeyer has designed a new set of costumes for the alternative rock band OK Go. They needed new costumes for their latest performance and Waldemeyer decided to stitch thousands of LED lights into their jackets making them into a moving light show. 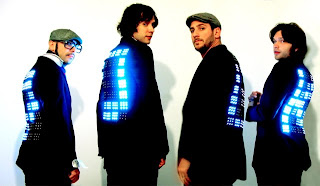 The lights on the jackets even scroll into symbols and spell out the band’s name.

All in all I think this is yet again another cool LED design. I don’t think the world of fashion has seen the last of LED designs. I also think that this new LED fashion can be interesting stuff to work with for those in the clothing industry, a lot of branding and communication potential. I wonder how long it will take before LED clothing will become mainstream.

What do you think of LED fashion? Will it ever go mainstream?